Corn is king.  Or is it?  We haven’t heard that catchy slogan as much as we did decades ago.  Corn was the undisputed king of crops in Minnesota until the year 2000, when more soybean acres were planted than corn for the first time ever.  In addition, since the 1980’s, soybeans have captured more acres than wheat in Minnesota.   Wheat acres have trended downward since the late 1970’s while corn and soybeans continued to make up more ground. 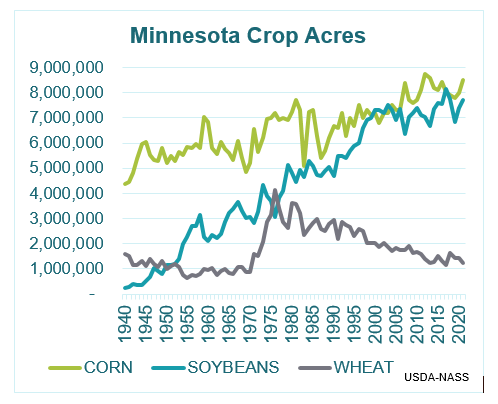 Supply and demand continue to impact the acres planted every year of corn, soybeans, and wheat, but what are some of the drivers?  Some forces in play have long-term implications, and could diversify acres further into specialty crops.

Corn yield in the U.S. increases annually at a rate of 1.9 bushels per acre, or slightly faster than 1%.   For beans and wheat, it’s growing slightly slower than 1% at 0.39 and 0.42 bushels per acre, respectively.   Genetic advancements will likely continue increasing productivity into the future.

Crops outside the U.S. are also increasing in productivity, and acres are expanding for row crops.   If yield continues to grow domestically, and global productivity and acres grow as well, will demand growth keep pace?  Perhaps each crop will tell a different story, based on product demand shifts.  Increases in double-cropping due to genetic improvements could also impact the supply side of the equation. 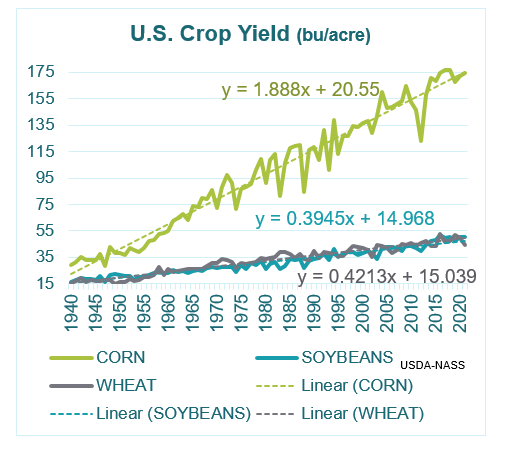 World nominal population growth is an important metric to observe, along with its impact on agricultural demand.   However, nominal growth doesn’t allow for economic comparisons like growth rate. The world population growth rate peaked in 1970 at 2.07% and has recently decreased to only 1.10% in 2020.  By 2050, we can expect this to slow further to 0.53%.  In the U.S., the rate is already down to 0.59%, and our largest trade partner, China, is at 0.39%. 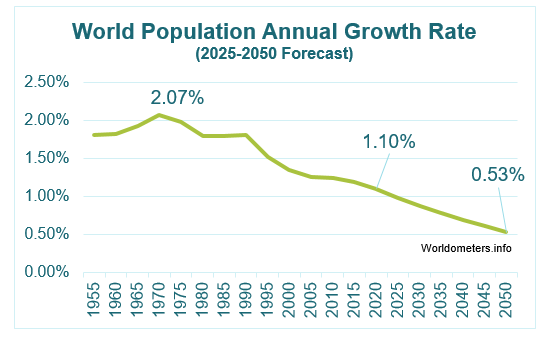 It’s a possibility that for some crops, once yield increases outpace population growth, overall demand becomes more challenging to sustain the same level of acres.  In three years, global population growth is expected to fall below corn productivity gains.  This is a big deal, because for the first time, growth in the corn crop will outpace domestic population growth.  Could this have an impact on crops back home in Minnesota?  Certainly, exports will continue to become more important.   Growth in animal protein demand also is an important factor.

There are already early indicators that some acres could shift to specialty crops.  Most of these crops today are small enough that a grower contract is typically necessary to transfer some risks off the farm to the processor.  Market access is not as widely available for a farmer that is selling specialty crops instead of exchange-traded crops.

One crop that has generally trended towards more acres in the 21st century is yellow field peas.   If current trends on yellow field pea demand continues, U.S. pea acres could increase to over 2.3 million acres by 2030.  Corn, soybean, and wheat acres often shift more than these 2.3 million acres from one year to the next.  However, farms around a specialty processing facility can impact what is grown locally, especially those with significant capital investments made.  Cargill invested $75 million into PURIS in 2019 to transform a Dawson, MN facility to process peas.  Investments like this could impact some local markets and play a growing role in specialty crop growth.

Population growth rate is a long-term measurement to look at for agriculture, but many large capital investments are also long-term decisions.  If demand for corn or soybeans begin to decrease, could peas or another specialty crop grow to rival today’s wheat acres in Minnesota and beyond? 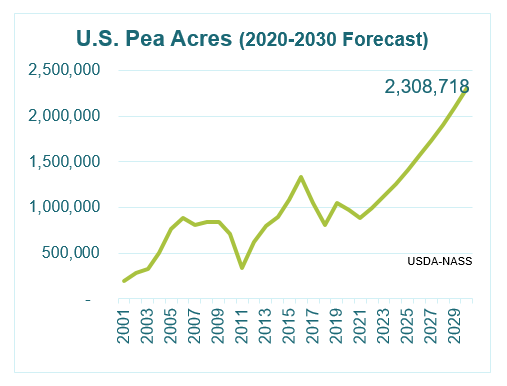