Many landowners throughout the Midwest are being contacted by solar developers to explore whether their farm property could be a suitable site for a solar array. Over the past several years, the development of these solar-powered electric generation grids has become more prevalent throughout the rural landscape. There are many factors which impact the underlying real estate of these solar projects. The first of these factors lies in the physical characteristics of the property itself.

The physical characteristics of a property and its surrounding environment play a critical component in determining whether a property is suitable for a solar array. Elements such as distance and access to power lines, acreage, topography, elevation/drainage, existing timber, and surrounding land uses play a significant factor in whether the property can and should be developed for solar electricity production.

Likely the most critical element is a property's accessibility and proximity to power lines. The solar arrays generating electricity require a grid to offload the production. As such, the distance to the nearest substation can be a limiting factor. Having access to the essential substation allows for the energy produced by the panels to be converted for grid use. Appropriate sites are generally located within several miles of these substations which minimizes the power loss (resistance). Similarly, the closer that the produced electricity is to the point of electricity consumption, the better.

The next determining factor to a site's viability as a solar array is the property's size. A smaller site limits the total electrical production potential of that property. Large-scale or “Utility-Scale Solar Projects” which may encompass hundreds of acres are often negotiated with multiple land owners. Through assemblage, lessees can create an adequate site size.

A site's topography has an impact on the production ability of the solar array. For those fixed arrays (non-motorized which do not follow the pathway of the sun), properties which are level in topography typically receive the most sunlight on a daily basis. The site's ability to capture the sunlight has a direct impact on the production capacity of that array. For panels located in North America, it is favorable to position panels facing south due to the earth's rotational axis. Below is a solar model depicting the annual average daily total solar resource (data from 1998 – 2016). As can be seen, the southwestern region of the United States commands the strongest readings with the northern areas of the nation being exposed to the least. 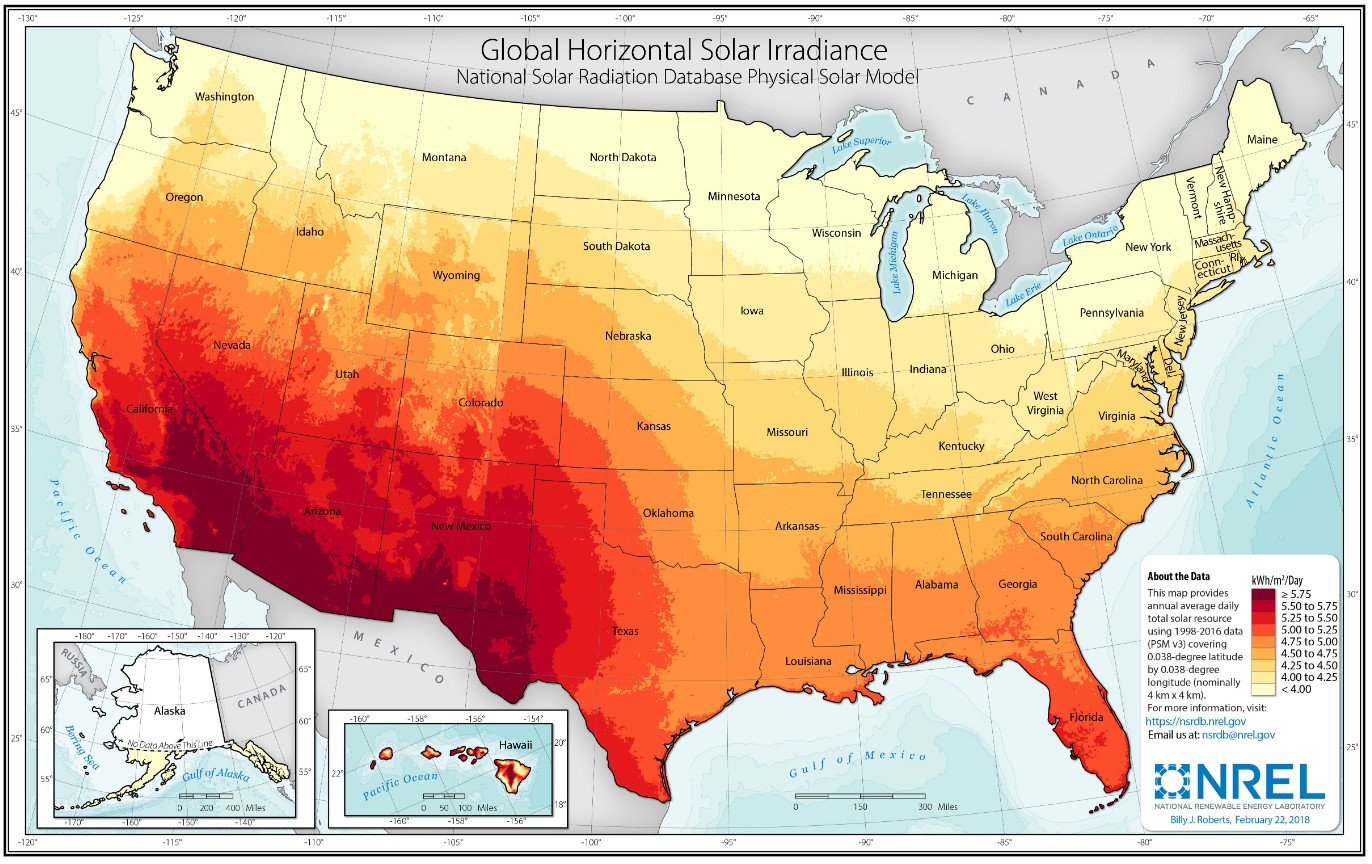 Properties lacking appropriate drainage and/or those with low topography often are characterized with short and long-term flooding issues. These property types are largely avoided due to the additional required infrastructure to install and maintain the equipment. Occasionally a tract must be cleared or a remediation project completed before the solar array can be constructed. Depending on the size and density of existing trees and brush, this can be hindrance and add to the project cost. Solar developers often prefer vacant land to avoid clearing costs.

A culmination of all of these physical factors have an impact on whether a specific site is suitable for a solar array. Other factors to be explored in later newsletter releases will include governmental and social forces along with the financial impacts and considerations of these solar projects.

To stay up-to-date on the latest land and equipment values, sign up for Compeer's appraisal e-newsletter.